During a heat wave a few summers ago, the kids and I flew into Sacramento en route to my grandmother's house in Northern California. I worried about the difference between San Diego and our destination's heat factor. We left Lindbergh Field's scorching 92 degree heat and traded it for Sacramento's 102. I remember thinking this was the establishment of a new baglady life axiom: it's all the same over 92 degrees.

This past week marked the birth and death of my little brother, Jonathan. The anniversary of his death, a day I hope to mark less - in favor of his birthday - with every year that passes, felt as equally bad as last year. It was more than just a day - I remembered each moment as it had unfolded in 2007. I'm not terribly great at math or time zones, so my tears were somewhat lessened by teasing myself I was likely crying off schedule. It was still painful to think of the time of his approximate death (again given time changes for Lagos) coming home from dinner. The world around me was wonderful: La Jolla, healthy kids, a wonderful guy who took me to a chick restaurant and played Cake to cheer me up. My reaction was more appropriate to watching a war zone. I wanted to scream and draw attention to the scene unfolding... but my adult, composed self remembered it was two years ago, far from this moment.

A friend going through similar grief, but six months newer than me, asked if the second year was easier than the first. My immediate answer was that it's not. Comparing the two years is no different, but I know it must be in some small measure. It's just that it's more like the difference between 92 and 102 degrees. I'm also convinced that the key to healing is to look outward; looking inward and experiencing pain won't bring Jon back. Time for my next project to honor you, Jon! Here's hoping 2010 will feel closer to 82.
Posted by Christine at 12:29 PM 1 comment:

Let's not even dwell on where I've been or why I stopped blogging. I'm ready to look ahead. Things I want to do in the near future:
1. Remind myself how to use a sewing machine.
2. Get an SLR camera. It has been too long since I've taken a good macro shot.
3. Cultivate my various plants, especially the tomatoes.
4. Mail out the final copies of my Christmas newsletter. See there are things I am almost as behind on as blogging.

In my last three minutes of spare time, I want to thank any of you who hung in through this dry spell. Will she be back? Who knows?!
Posted by Christine at 9:25 PM 2 comments: 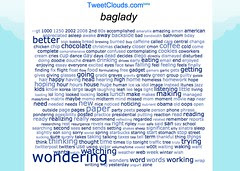 Tweetcloud
Originally uploaded by baglady
Thanks to artlung for the tip on TweetCloud. I love how my most used word is "wondering" followed by obvious ones: chocolate and coffee.
Posted by Christine at 7:08 PM 1 comment:

" I sometimes feel that I have nothing to say and I want to communicate this." Damien Hirst

After not posting to my blog in months, I started to wonder at which point should I declare it dead? Do you just let it languish a la a tree falling in the forest and all that? It began as a baking blog and I do still bake twice a week or more. I think I'm just more into my non-digital life and if anything Twittering these days. Back to my blogging sabbatical.

P.S. This post was written weeks ago and I am finally publishing it. Just to clarify before anyone worries I am not** diligently working on my term paper.

P.P.S. Ha! Freudian slip perhaps? I meant to say that I am, although at this exact second, I obviously am not... but I so will be in 20 seconds.
Posted by Christine at 3:28 PM No comments:


Cinnamon Rolls
I baked cookies at a friend's house last week and in reading through cookbooks, trying to be inspired about cookies, I kept coming back to cinnamon roll recipes. I wanted to bake something with yeast. 2 oz or 8 packages of yeast. First I made a sponge: 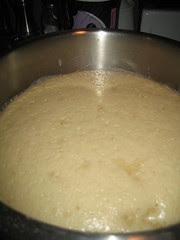 While the sponge rose, I put massive amounts of flour and sugar together with yolks and butter: 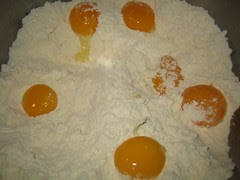 Lots of mixing and kneading later, I produced this ball of dough: 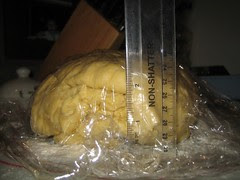 I watched it rise twice, rolled out the dough using my super duper rolling pin and slathered on butter, cinnamon and sugar: 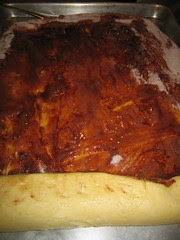 I rolled it tightly and cut it into rolls. Yay, I was almost finished: 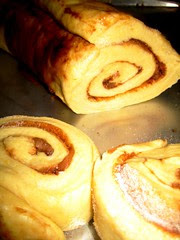 Just for fun, I watched the rolls rise AGAIN: 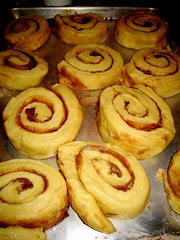 It took a while, but after several minutes the most amazing smell started to emanate from my home: 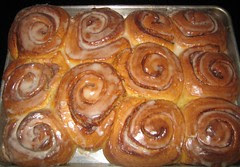 Here is the sad postscript... neither the kids nor I really liked them. I did engender much good will from pals at work and from Mr. Green Eyes. I'm looking for a really good cinnamon roll recipe so I can try again!

The six egg whites made wonderful chocolate chip meringue cookies that were gobbled up and loved by all.

There were a few questions that just didn't have the answer I wanted to give, but here it is folks. BTW, xoxox to Steve Forbes:

How Liberal Or Conservative Are You?
Posted by Christine at 1:12 PM No comments:

Suddenly short online quizzes that generate profound predictions complete with HTML and embedded ads seem so much more fun than trying to figure out if my t-stat is statistically significant. Signs are pointing to yes and hey, check this out since you already read all that:

If Your Life Was a Movie, What Genre Would It Be?
Posted by Christine at 1:05 PM 1 comment: